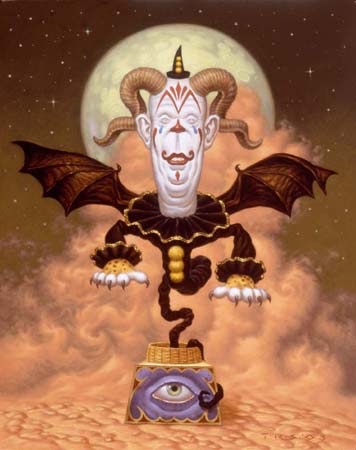 We are used to the fact that extremely popular songs sooner or later become old-fashioned. Then people begin to make remixes, updating the original and giving it a new flavor to suit the new time – the same song but seen through a new perception. A similar trend can be seen in the art world, where contemporary artists produce their own take on the great masterpieces of past centuries. They create a new version that remains based on the original, yet reflects more closely the concerns of the modern world.
By creating modern artworks which are based on earlier works, contemporary artists can trade on the fame of the originals, and at the same time challenge the inviolability of these masterpieces. In the process, of course, they turn public attention to their own art. Some works of art have more of this kind of attention than others – for example, the Mona Lisa has so many that there is no definite count – and in general this sort of secondary fame is good for the public image of the original, which reaffirms its place in the public consciousness through its use in contemporary versions.
For example, Norman Rockwell’s image of “Rosie the Riveter,” a cultural icon that initially encouraged and later epitomized the work of women in industry during World War II, in fact pays homage to Michelangelo’s frescoed depiction of the prophet Isaiah from the Sistine Chapel ceiling in the Vatican. Rockwell’s “Isaiah” has been transformed into a strong woman ” Rosie ” eating her sandwich with a rivet gun on her lap and a copy of Hitler’s manifesto, Mein Kampf, underneath her boot.
“Bridge over a Pond of Water Lilies,” a piece by the founder of French Impressionism, Claude Monet, was given a contemporary twist by controversial British graffiti artist and political activist Banksy. In his version, Banksy portrayed shopping trolleys and a traffic cone floating in his pond.
Adaptations of well-known classical artworks can also be used to advertize a particular message. In Germany, the Anorexia Nervosa and Associated Disorders support organization reminded the public how beauty ideals have been changed (or perhaps distorted) nowadays. Three paintings by German artist Remus Grecu – “Nude lying on a sofa”, “The bather of Valpinon” and “Olympia” – were placed in the Stdel Museum in Frankfurt, accompanied by contemporary versions of paintings by Boucher. The campaign won a Bronze Media Lion at the Cannes International Advertising Festival 2009.
Creating a contemporary version of the art of past centuries shows that we respect traditional art, but we do not consider it as something eternal, untouchable, and remote. Instead, it is something that remains a living part of our lives and culture, and which can be used as part of a discussion going on today. This both animates the debate and gives new life to the old masterpieces, increasing awareness of them and making their continued relevance clear to a wider public than might have been reached by the original image itself.